Arsenal star playmaker Mesut Ozil has issued his reaction to Saturday’s draw against title rivals Liverpool at the Emirates stadium.

The Gunners were held to a 1-1 draw which saw them drop out of the top four into fifth spot with 23 points after 11 games. Arsenal are six points behind league leaders Manchester City.

Ozil prised his side’s mentality after coming back from a goal down to level the game. The 30-year-old also believes that progress is being made this season under manager Unai Emery.

Good team mentality – great to come back after going behind. Progress is being made. ⚽? #YaGunnersYa #ARSLIV #M1Ö @Arsenal pic.twitter.com/ar3WYnPCtf

Ozil was also spotted having a conversation with Liverpool boss Jurgen Klopp after the final whistle. Klopp appeared to be sharing a joke with Ozil. 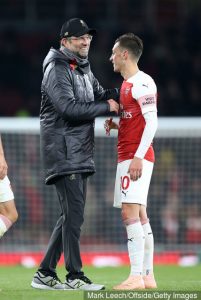 The former Real Madrid man played the full 90 minutes for Arsenal against Liverpool in his favoured number ten role. Ozil has been in impressive form of late but was unable to get himself on the scoresheet over the weekend.

The former Germany international played four key passes, maintained a pass accuracy of 84.8% and took 57 touches on the ball, according to WhoScored.com.

Arsenal are back in action in the Europa League this week when they take on Sporting Lisbon. The Gunners next Premier League clash is against the newly promoted Wolves.