Mohamed Elneny has hit a rich vein of form on loan at Besiktas from Arsenal over recent weeks.

Elneny has started in each of the Black Eagles last five games in the league all of which have ended in victory.

The Egypt international was in impressive form on Monday in the 4-1 victory over Kayserispor.

Elneny shared a clip from the game on his official Instagram account producing an outrageous skill followed by an intricate passing combination with Burak Yilmaz who he ended up setting up for a fine goal. 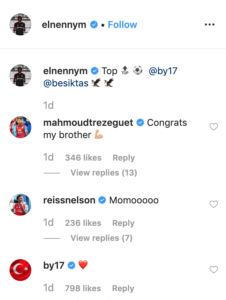 The 27-year-old joined Besiktas on loan from Arsenal this summer with an €18m option to buy.

The Black-Whites would be unable to activate his buyout clause due to financial constraints so it looks like Elneny will be returning to north London after his loan – unless the Gunners were to lower their asking price.