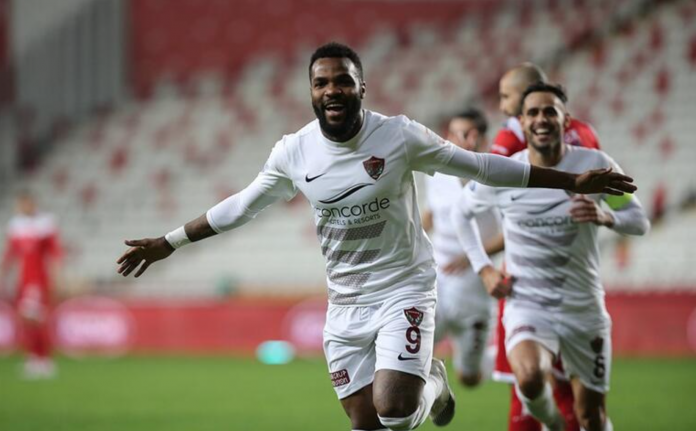 Per the source, West Ham, Newcastle, Crystal Palace, Brighton, Wolves and Southampton are also interested in the striker.

The Saints have reportedly sent scouts to keep tabs on Boupendza and are interested in the forward as a potential replacement for Danny Ings – should he leave.

The 24-year-old meanwhile, is keen on moving to the Premier League and following in the footsteps of compatriot Pierre-Emerick Aubameyang.

The newly-promoted Super Lig side accepted a £7m bid from Russian side Krasnodar recently but the player turned it down.

Boupendza has been in impressive form this term scoring 18 goals in 28 appearances, helping Hatayspor move into 6th place.

Most football pundits in Turkey predicted Hatayspor to struggle this season but Boupendza has played a key role in his side exceeding expectations.

“There is no agreement between Fenerbahce and Hatayspor regarding Boupendza,” club president Dr Luftu Savas told Radyospor.

“There are wishes and ideas. If an agreement is reached that satisfies both sides, a transfer is possible. But such an agreement and the terms of a transfer have not yet been discussed in detail.

“If everyone else offers around £8.5m, we’d love Fenerbahce to give £10m. I expect support from Fenerbahce. President Ali Koc will certainly be generous.”