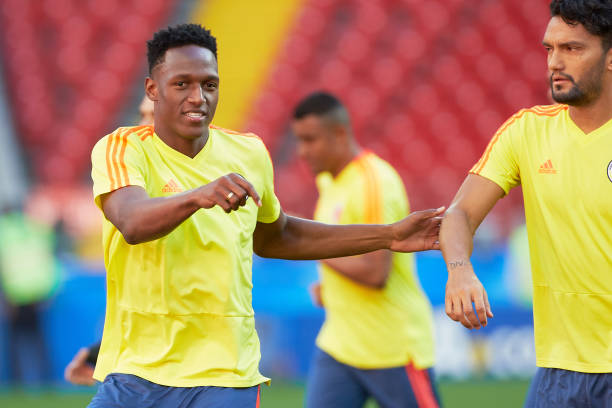 Fenerbahce have been closely linked with a move for Barcelona defender Yerry Mina.

A source close to Fenerbahce revealed to Turkish-Football that they have been interested in the Colombia international since before the World Cup.

The Yellow Canaries are growing concerned that their chances of landing a deal for the defender are becoming increasingly slim.

Mina made a name for himself in Russia this summer, becoming the first defender to score in his first three World Cup games.

Agents working on the deal informed Fenerbahce that Everton have made a move for Mina.

Fenerbahce would be unable to compete with the Toffees if a bidding war were to unfold despite reports in Spain claiming otherwise.

The Istanbul based outfit want Mina on a loan deal but are unsure what Barca have planned.

The latest development follows Goal reporting that Everton have made a €24m move for the 23-year-old.

Per the source, Barcelona would prefer to loan the player for a €2m fee but would sell if they can retain a buy-back option in his contract.

Despite the Everton offer Fenerbahce have not given up hope.

The Super Lig outfit are still pushing for a move. Club president Ali Koc has close ties to Barcelona, in fact one of the companies that fall under his umbrella – Beko – are a club sponsor.

Koc hopes to use his ties to the club as leverage in securing a deal.

Fenerbahce would, however, be unable to match the Toffees €24m bid if Barcelona were to consider selling him on a permanent basis.

Mina does have an £88m release clause but Barcelona are aware they would have to settle for a lower fee if they hope to sell him considering he was hardly played last term.

The Colombia international joined Barca from Palmeiras in January but made just five appearances.