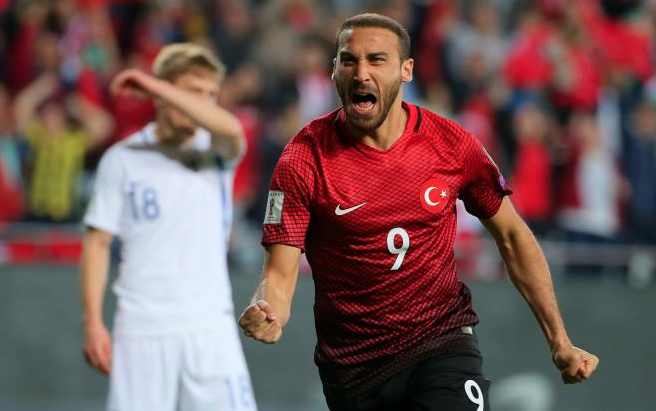 Everton star Cenk Tosun has left the Turkey national team camp after picking up his first red card in the 2-2 draw against Tunisia, in Switzerland, on Friday.

The 26-year-old leaves the camp having scored three goals in two games over the international break.

Tosun has actually been directly involved in seven of the Turkey national team’s last eight goals.

The striker will not feature against Russia as a result of the red card.

Tosun was involved in a controversial sending off after a confrontation with with a section of the fans behind the team benches.

Cenk Tosun was shown a straight red. So odd. Very unlike him. He was captain & had scored pic.twitter.com/hgnkrzrjtN

Turkish-Football were informed by a member of the Turkish Football Federation that Tosun reacted to flares and a smoke bomb being hurled at his father and uncle.

The striker revealed that he saw his father surrounded by fans in the stands and that is what sparked his animated reaction.

Tosun underlined that he was genuinely concerned for his fathers safety after seeing him surrounded.

“I am usually very calm, I lost the plot, a red mist descended on me,” Tosun said after the game.

“First of all I would like to apologise to the Turkish people and my teammates, when you wear the national team shirt you have to act responsibly.

“I let my teammates and myself down, we could have gone onto win the game had I not reacted like that.

“But I am human, I am a professional footballer but I am also human.

“I am very close with my father, he played a huge role in me getting to where I did my career.

“When I saw what happened in the stands I could not hold myself back.

“All I can do is apologise.

“I turned my head and saw them surrounding my dad shouting at him,” he added.

“I ran over to get them to leave him alone, I was irate, I threatened them to get off my dad and back down, in hindsight it was not the best way to deal with the incident. I was not thinking straight or acting rationally, I was really concerned for my dad. People do crazy things when they see loved ones in trouble.

“I will learn from my mistake and apologise once again.”