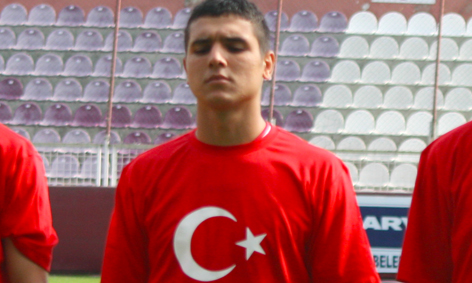 Ethem Ercan Pülgir plays for Kartal and is a very physical young centre-back who has doesn’t shy away from making strong tackles and winning vital headers.

Standing at an imposing 6’1, Ethem is expected to be one of the first choice centre-backs and fits nicely with the other more techincal defenders. Pülgir is a rock at the heart of the defence but also has a rough and aggressive side to his game making him any striker’s – and on occasion his own managers – worst nightmare.Pülgir was born in Samsun, on Turkey’s Black Sea coast however, he started his playing career in Istanbul at amateur club Kaynarcaspor when he was 10.The young defenders stay at Kaynarcaspor was short lived, Pülgir only spent a year at the club before he was signed by Kartal in 2005. He went on to work his way up the ranks for the 1. LIg side before being moved to the senior squad in 2011 aged just 18.Pülgir was handed his debut manager at the time Besim Durmuş on the first day of the season. He came on with 20 minutes to go and helped towards securing a 1-0 victory. Ethem went on to make a further 17 appearances that year and contributed towards keeping 11 clean sheets that year as Kartal finished 9th.The 20-year-old centre-back was starting to make a name for himself and cemented a regular place in the side despite being just 19 at the time. This season Pülgir 28 appearances but his side only kept 6 clean sheets ended up being relegated. Pülgir developed a more agressive side to his game in 2012-13 as he picked up 11 yellow cards and was sent off once. This new found aggression helped Pülgir fight for the ball and work harder but he must be careful not to lose his head and make reckless challenges which could cost the team.Kartal are a bit of a yo-yo club and keep jumping back and forth between 1.Lig and 2.Lig. The Istanbul based club is currently going through a tough time and have financial issues. Despite the problems, Kartal have a reputation as producing quality players – current Turkey No. 1 goalkeeper Volkan Demirel rose through their ranks. Not to mention two notable Turkish international centre-backs Servet Çetin and Egeman Korkmaz who both have a very physical and daunting aspect to their game – something Pülgir shares in common with them. Pülgir is fairly new to Turkish international football having only played for the Turkey U20 and U21 sides. However, he has never lost a competitive game whilst wearing the Turkish shirt and also has a goal to his name. Turkey will hope Pülgir can be their lucky charm this summer as they target a successful campaign.Pülgir will be hoping he can lead Kartal to promotion next season or use the U20 World Cup as a platform to attract interest. Several Süper Lig teams have shown interest and a move to the top tier of Turkish football could be his lifeline.Watch out for Pülgir’s outstanding aerial abilty as well as his crunching tackles. If any striker wants to score a goal he will have to beat Pülgir and more often than not neither the ball nor the player gets past the fiery defender.By Emir Afiya You can follow Emir on Twitter: @TotalTurkTalk