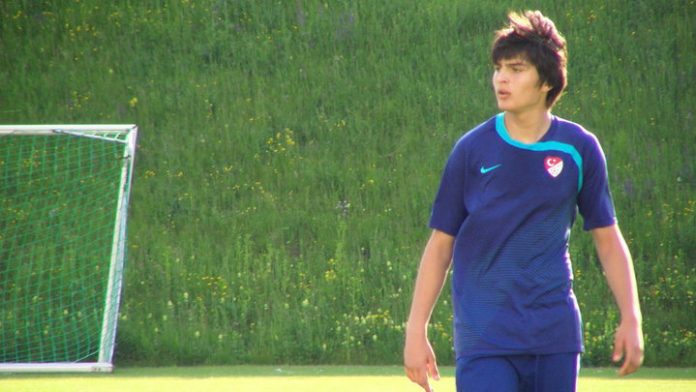 Okay Yokuşlu is one of the brightest prospects among the Turkish U20 side. The towering center midfielder stands at a staggering 6’2, but despite his height he possesses technique and quality on the ball. Okay is the most experienced player in the team, picking up 24 appearances in the Süper Lig this season.Okay was born in Konak, Izmir which is home to Karşıyaka; the club which first discovered him aged just eight-years-old. He spent 4 years at Karşıyaka where he was making good progress until he was picked up by city rivals Altay, aged 12.The young midfielder spent a further four-years among the youth ranks at 1. Lig side Altay before making his debut in the 2009-10 season at just 16. During his debut season he picked up 12 league appearances and scored twice as Altay finished 4th.The following season did not pan out according to plan as Altay ended up being relegated at the end of 2010-11 however, Okay impressed again – picking up 21 appearances and scoring another 2 goals.Okay was beginning to attract a lot of interested from Turkey and abroad. Bundesliga giants Borussia Dortmund, Bayern Munich as well as Turkish juggernauts Beşiktaş, Galatasaray and Fenerbahçe had all been scouting the Altay youth. The Izmir club was reluctant to sell however, couldn’t refuse Kayserispor’s massive £975,000 offer. The figure was and still is an Altay transfer record and made Okay the most expensive 17-year-old transfer in Turkish league history.The young midfielder moved to one of the most forwards looking clubs in the league. Kayserispor’s chairman Recep Mamur has been responsible for transforming Kayserispor into an established side over the last few years. Not only that but Kayserispor have magnificent facilities and the most accomplished youth football director in the league – Gerard Van Der Lem.Not to mention their fantastic new stadium the Kadir Has, which holds over 30,000 and has a four-star rating according to UEFA. Okay’s first season at Kayserispor started magnificently, he made his debut under Georgian manager Shota Arveladze in September 2011 and went on to pick up 22 appearances score twice. He looked natural in the team and didn’t seem fazed by the step up to the top-tier. Despite his great start at the top level, Kayserispor couldn’t find their form and finished dangerously low in 12th.Arveladze was sacked and was replaced by Robert Prosinecki in October 2012 and there were fears that a change in personel could could scupper Okay’s blistering progress. The question mark over Okay’s future was soon put to rest as Prosinecki showed faith in his young starlet and played him 24 times in 2012-13. Kayserispor went from strength to strength under the new coach and finished the league in fifth position – matching the club’s highest ever finish.Okay’s exponential progress seems to have no limits and if Kayserispor continue to nurture his talents, they may find it very hard to hold off interest from the top clubs despite his tender age of 19.Okay is vital to the Turkey U20 side as he is the core of the side in heart of the midfield. His leadership skills resulted in being awarded the captain’s armband for several of the Turkish youth teams who he has represented since the age of 15. Okay has the ability to spray the ball across the pitch as well and has a dangerous long shot. The 19-year-old rising star will keep the side ticking over and his experience will come in handy – Okay has made 87 appearances over the last four-years.By Emir AfiyaYou can follow Emir on Twitter: @TotalTurkTalk