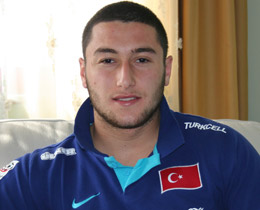 Twenty-year old Gençlerbirliği striker will not only be leading the front line but also captaining the Turkish national team in the FIFA U20 World Cup 2013. The 6ft goalscorer is an all-round striker who knows how to use his speed, agility and strength to his advantage.Artun was born in Ankara, Turkey where he was picked up by local club Gençlerbirliği who he still plays for. Gençlerbirliği snapped up the youngster back in 2003 when Artun was just 10-years-old.Gençlerbirliği are renowned for having a well-established youth network as well as a state of the art youth academy that stretches over 50 acres wide. Gençlerbirliği have a habit of giving young players a chance and seems only fitting considering the clubs origins. Gençlerbirliği translates to, Union of Youth – the initial members of the team were young students who rallied together to form their own team after failing to make the school team.Artun played in the youth ranks till he was 16 after which he was moved to the first team. However he didn’t make any appearances in his first two seasons and was subsequently loaned out in 2010 to Hacettepe who were playing in the 2. Lig at the time.In 2010-11 Artun scored three goals in 21 games but was often playing in slightly deeper roles or on the wings. Hacettepe were relegated at the end of the season but signed Artun on a loan again the following league campaign in an to attempt to return to the 2. Lig. Artun smashed in 21 goals in 32 games but despite his impressive strike rate Hacettepe were relegated again.Gençlerbirliği decided Artun had proved his worth despite his team’s poor performances and recalled the young striker for the start of the 2012-13 campaign. Artun made his debut on the opening day of the season when he came on as a substitute in Gençlerbirliği’s 3-1 victory over Antalyaspor.Artun made 16 appearances in the league this season but 11 were as a substitute. Artun failed to find the net in any of the games but the young forward was played on the wing on numerous occasions.The 20-year-old striker found more luck in the Turkish Cup – grabbing seven goals and making two assists in three games. However, where Artun has really been making a name for himself is at international level where he has scored an astonishing 38 goals in 64 games which equates to more than one goal every two games.Watch out for Artun’s great footwork along with a lethal left foot which will be a threat to any defence. He can score with both feet and is also accurate with his head so expect to see Artun on the score sheet.Artun will hoping to shine in the U20 World Cup and establish himself as a first team regular at Gençlerbirliği next season. The U20 Turkish national team captain has a great opportunity to showcase his talent on the international stage. Turkish football currently has a shortage of quality strikers; Artun has a great chance to establish himself as the future goalscorer for the national team. By Emir AfiyaYou can follow Emir on Twitter: @TotalTurkTalk