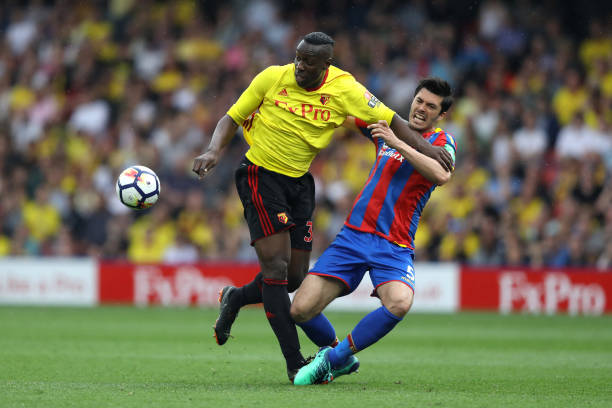 Galatasaray are said to be keen on coming up with a deal for Watford forward Stefano Okaka this summer after attempting to sign him back in 2014, as well as last year.

That is according to reputable Italian publication La Gazzetta dello Sport, who are claiming that the 29-year-old striker, eligible to represent Nigeria in international competition despite his Italian roots, has become a target for the Turkish club yet again.

Okaka has made four appearances for the Italian senior side, having played youth football for the country from Under 19 through to Under 21. But being born to Nigerian parents, he is able to play for the Super Eagles too, should both parties so desire.

The striker spent the second half of last season on loan with Udinese and could possibly leave Vicarage Road again, given his placement in the pecking order. He has reported to Watford for pre-season training, however, and should be looking to convince management he deserves a fair shout at regular football next season.

Okaka is coming off an impressive loan spell in Italy, during which he scored six goals in 16 appearances, with 11 of those being starts. His time in the Premier League with the Hornets hasn’t been all that glamorous, though. He has only managed 13 starts since he joined the English club in 2016, scoring just five times in 36 total appearances.

The player does seem like he could make a great addition to Galatasaray, who are looking to repeat last season success and are bent on strengthening as the upcoming term approaches.

If perhaps you’re looking to get involved in a bit of online sports betting next term, Unibet are offering odds of 13/10 on Gala winning the Super Lig title at the end of the 2019/20 season. Besiktas, the second favorites, are 2/1 and Fenerbahce have odds of 5/1 attached to their names.

Istanbul BB are also 5/1 with the aforementioned bookmakers while Kasimpasa are 25/1. Any bet lower down the line will likely net you a nice sum if that team somehow manages to upset the league with an unexpected trophy capture.

As for a top-four finish, Galatasaray are 1/33 with Unibet, Besiktas are at 1/20 and Fenerbahce have been given odds of 1/10.

Whether or not the Turkish side lands Okaka this time around is left to be seen. But if they really are still interested – as the report suggests – and they manage to obtain his signature, their chances of winning the league should receive a major boost.

Meanwhile, another reported target is believed to be ready to turn them down. According to Calciomercato.com, French midfielder Steven Nzonzi is unwilling to make the move from AS Roma to Galatasaray, with the latter reported as having made a “firm bid”. The 30-year-old joined the Serie A outfit last year and is contracted until 2022 but Ligue 1 side Olympique Lyonnais are considered favorites to land him as he would prefer to join a club from one of Europe’s top five leagues.

Nzonzi cost Roma €26.65m, with performance-related add-ons potentially taking it up another €4m. It’s unclear how much Galatasaray has offered for the Frenchman but it is likely to be in the region of his last transfer fee.