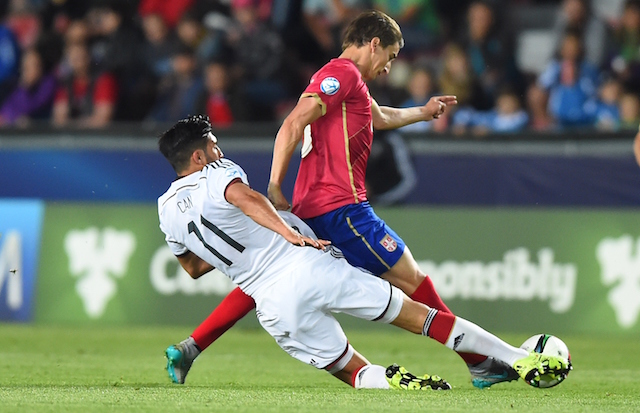 The Reds racked up a 3-0 victory during the pre-season friendly played at the Olympiastadion.

Emre Can was included in Jurgen Klopp’s starting line-up. The decision came as a surprise to Liverpool fans seeing that the 23-year-old has been linked with a move away from the club.

Serie A giants Juventus were recently reported to be preparing a €45m bid (Sozcu) for the combative midfielder.

Summer signing Dominic Solanke opened the scoring on Saturday night against Berlin. The Reds went into the break 2-0 up after Georginio Wijnaldum doubled their lead.

Mo Salah capped off a great night shortly after the hour mark to earn Liverpool the win.

Can looked to be in impressive shape despite being given an extended summer break. The 23-year-old represented Germany at the Confederations Cup in Russia last month.

Liverpool fans took to social media after the game to heap praise on their star man.

Emre can this guys class

Emre Can's powerful run through the middle of midfield! ?? pic.twitter.com/dm0UD7dyn6

How well has Emre Can played in his first match of the preseason. ?? #LFC

would be happy with Emre Can tied up to a long term deal and a CB ..