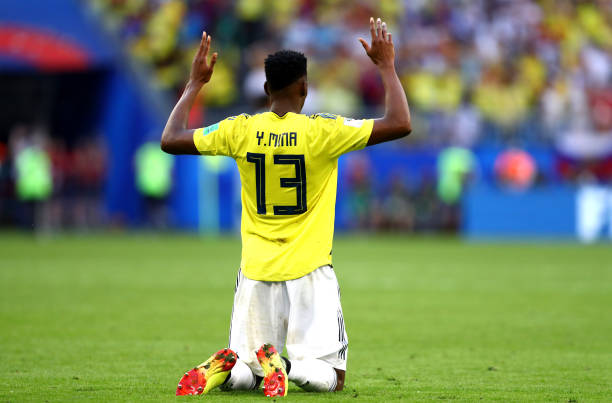 Barcelona defender Yerry Mina’s agent has spoken out about the Colombia international’s future.

The 23-year-old has been closely linked with a move to Turkish Super Lig giants Fenerbahce.

Meanwhile, both Everton and Liverpool are understood to be interested in signing the towering centre-back.

Mina’s agent has however poured cold water on speculation linking the World Cup star with a move away from Barcelona.

Mina is understood to be happy at Barcelona and wants to be successful with the La Liga champions. Mina’s agent and uncle Jair Mina told a Spanish radio station that his nephew has not received any offered from abroad.

“I’m not aware of any bids,” Jair Mina was quoted as saying by Milliyet.

“The player has a contract with Barcelona and wants to stay at Barcelona.

“We’re going to see what the situation is with the club, but we don’t have any information.

“He moved in January to succeed at a big club and Barca are a big club.

“He is convinced he will get the chance to do big things and our idea is that he stays where he is.”

See More: Liverpool Could Have World Cup Star For Just €10m If They Include Daniel Sturridge In The Deal

Mina joined Barcelona from the Brazilian side Palmeiras last summer. The 23-year-old made just six appearances for the La Liga champions during the 2017/18 season.

The towering defender played a starring role for Colombia at the World Cup and scored against England during their defeat to the Three Lions earlier this week.