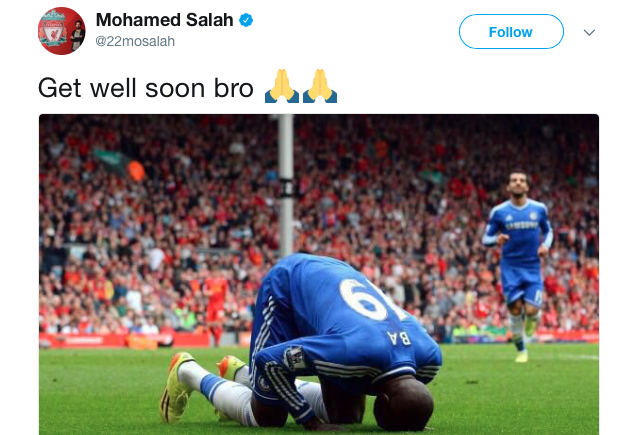 Mohamed Salah completed his move from Roma to Liverpool for a club-record £35 fee (BBC) last week.

Salah appearaed to have sparked controversy after a tweet he made for former Chelsea striker Demba Ba.

The Senegal international is currently on loan at Besiktas but is set to return to his parent club.

Ba was top scorer in the Turkish league during his time at Besiktas but he conjures up less fond memories after delivering a serious blow to Liverpool’s title challenge in 2014.

We took a look at how Liverpool fans reacted to Salah’s tweet on social media.

After all the tweet was from a year ago before he was a Liverpool player and to be fair he is just sending his best wishes to an injured former teammate.

sigh. We don’t want you at our club then.

Erm we don’t want you at are Cluj

There were Liverpool fans who thought it was all an overreaction.

This is over a year old. Why’s it a problem?

I cant belive those stupid fooking pricks are giving hate to Salah for sending a support message to Demba Ba a year ago!!