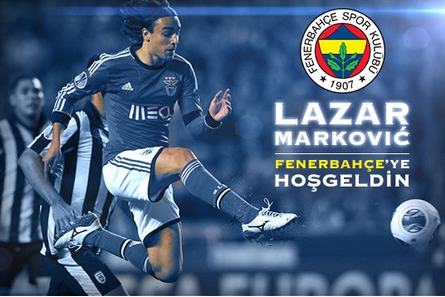 Fenerbahçe have released a statement on their official website confirming the loan transfer of Liverpool forward Lazar Markovic on a one-year deal.

Markovic joined Liverpool on a £20 million move from Benfica last season and scored three times in 20 appearances for the Reds.

The 21-year-old had seven goal in 49 games for Benfica during his time in Portugal.

Markovic also has three goals in 20 international appearances for the Serbian national team.

The statement did not disclose if the Yellow Canaries have a buyout clause option for the 21-year-old forward.

Fenerbahçe take on newly promoted Antalyaspor today in the Turkish Super League. Markovic is expected to attend the game but will not be able to make his debut until next week.

The Istanbul giants will compete in the Europa League this season. Fenerbahçe drew Celtic, Ajax and Molde in Group A.

The Yellow Canaries are currently managed by Portuguese manager Vitor Pereira and are eight in the league.