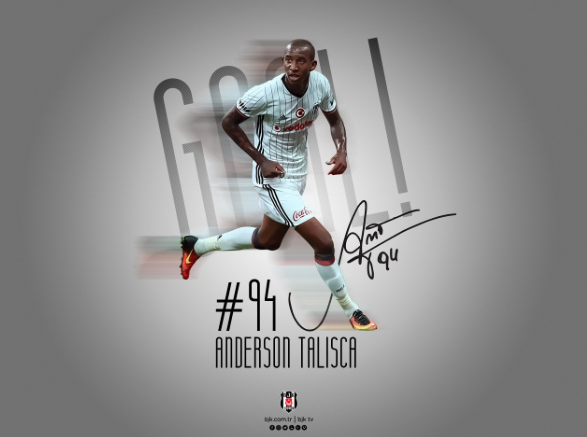 Manchester United have been closely linked with a move for Anderson Talisca ever since his interview with Globoesporte.

Talisca claimed that Jose Mourinho wants him at Manchester United.

“That is a question I can not give an answer to just yet,” Talisca was quoted as saying when asked about United interest.

“Look every player dreams of playing under him [Jose Mourinho]. Mourinho wants me, he has wanted me for a long time and I am an admirer of his work.

Reports in Turkey went onto claim that United have all but agreed terms with Talisca and were ready to activate his release clause.

Besiktas club official Umut Guner has however, denied claims that Talisca will be leaving this summer.

Guner underlined that United and any other club interested must wait another 12 months if they want to sign the Brazilian.

See More: 3 reasons £22m Talisca would be a success at Manchester United

“There is no deal with Manchester United or anyone else in place,” Guner was quoted as saying by Turkish-Football.

“We agreed to a two-year deal with Benfica. The loan did had a clause that he had to activate the option which we did.

“Talisca will stay at Besiktas on loan for another season.

“Reports claiming that he can be signed for his £22 million release clause are false, he has a deal with us

“If a club wants to sign him now they will have to wait another 12 months.”

Contrary to reports in Turkey claiming otherwise it turns out Besiktas have already agreed terms with Benfica over extending his loan deal by an additional season.

Talisca has another two-years remaining on his Benfica contract and he does have a £22 million release clause.

The Brazilian ace had an impressive season on loan at Besiktas scored 17 times and providing six assists.

The 23-year-old played an important role in Besiktas winning the league title for a second season running.