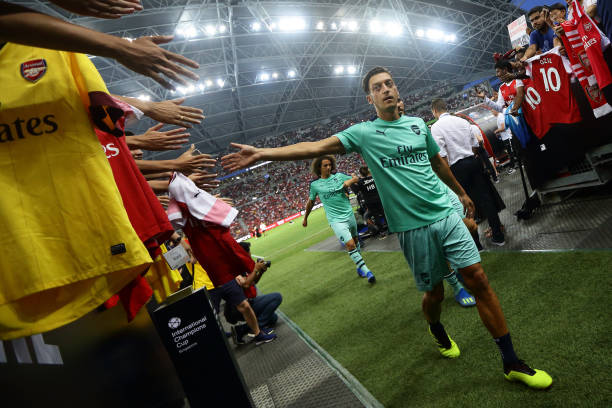 A photograph of a young Kenyan boy wearing a self-made Arsenal jersey with Mesut Ozil’s name written on the back went viral in March.

“I saw this kid today grazing in the streets of Nairobi – a city without really grass for cows. He told me he loves Mesut Ozil so much(You can see his shirt). Maybe one day this can reach Ozil and get a real Arsenal shirt.”

I saw this kid today grazing in the streets of Nairobi – a city without really grass for cows. He told me he loves @MesutOzil1088 so much(You can see his shirt). Maybe one day this can reach Ozil and get a real @Arsenal shirt. pic.twitter.com/ojDbf1Loil

The tweet ended up reaching Ozil and the Arsenal star was so touched by the image that he sent out an official signed Arsenal shirt to the young fan.

The picture of a Kenyan boy with a self-made shirt on Twitter touched me so much. 🇰🇪❤ And look at Lawrence now – it's so heartwarming to see him and his brothers happy🙏🏼😘 #CheckOutMyInstaStory #SocialMediaPower 💪🏼 #HappyToAssist #Nairobi #M1Ö

Ozil has since gone onto send Arsenal shirts to all the other kids in the village so they do not feel left out.

Thank you @MesutOzil1088 for making a dream come true. Nairobi loves you❤❤. #KingOfAssists. Proud to have been part of this great thing. pic.twitter.com/G4pZMB2eTo

Ozil also shared a photograph of the kids wearing the shirts.

Ozil is involved in several charitable projects and recently partnered with the Rays of Sunshine charity which grants wishes to ill children in the UK.

The Gunners take on Valencia tonight in Spain in the Europa League semi-final second leg tie after winning the first game at the Emirates by a 3-1 scoreline. Ozil is expected to feature against the La Liga outfit.