Week 2 of the Süper Lig was full of more twists and turns than a taxi ride through Istanbul. From Ricardo Quaresma scoring wonder-goals to newly promoted Osmanlispor toppling reigning champions Galatasaray at the Türk Telekom Arena the second week of games did not disappoint. 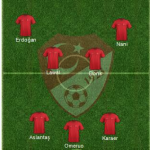 Team of the Week

Volkan Demirel – Fenerbahçe: The experienced keeper was bombarded with shots and even a penalty in the first half against Rizespor but managed to keep out everything thrown at him until three minutes before the final whistle when Kweuke equalised.

Omeruo – Kasımpaşa: Jose Mourinho would be most proud with his on-loan young defender playing another key role in his side keeping back-to-back clean sheets. The 21-year-old made the highest number of tackles (4) and clearances (6) over the course of the 90 minutes. The Istanbul minnows beat Başakşehir 1-0 at home to move into joint first with six points after two games.

Aslantaş – Osmanlıspor: Hakan Aslantaş caused Galatasaray problems down the flank in what turned out to be the upset of the week as Osmanlıspor (Ottomanspor) toppled reigning champions Galatasaray at the Türk Telekom Arena – a victory the Ottomans themselves would have been quite impressed by. Oh and we almost forgot he also provided an assist in the 2-1 win over the Lions.

Kararer – Eskişehirspor: Karaer setup Kanak with the second goal and proved a constant threat on the break making the most number of key passes for his team (2) in the 4-2 win over Sivasspor.

Nani – Fenerbahçe: The Portuguese international provided his first assist since leaving Manchester United for the Yellow Canaries over the summer. Nani also setup Robin van Persie for the first time in 598 days. The 28-year-old pulled the strings in the final third making the highest number of key passes (3) and dribbles (2) in the entire game. And who said Nani doesn’t work hard? The experienced winger made the joint highest number of tackles in the game (4) and three clearances.

Yusuf Erdoğan – Trabzonspor: Erdoğan caused Beşiktaş a migraine on the counter-attack and provided an assist in his sides 2-1 win over Beşiktaş. The 23-year-old is establishing his name as one of the hottest wingers in the league and it would not come as a surprise were he to get a call-up to the Turkish national team.

Ryan Donk – Kasımpaşa: We had our reservations about Donk playing as a defensive midfielder but two wins and two clean sheets on it is becoming pretty clear that the Dutch defender-come-midfielder is more than capable. The 29-year-old wrapped up a fine performance with an assist in his sides 1-0 win over Başakşehir in the mini-Istanbul derby.

Lawal – Eskişehirspor: The Nigerian international played an integral role in his sides 4-2 win over Sivasspor. Lawal pulled the strings in midfield contributing to attack and defence. The 25-year-old provided an assist and cleared a ball off the line. An all round heroic performance from the tough-tackling EsEs star.

Gekas – Eskişehirspor: The Süper Lig’s Greek hero roams across Anatolia scoring hat-tricks wherever he goes. The 34-year-old striker managed to achieve cult status among the home faithful in his first game as he scored a hat-trick – his third in league history – in the 4-2 demolition job against Sivasspor.

Van Persie – Fenerbahçe: The former United man had quite a week. First he scored the winning goal in Fenerbahçe’s 1-0 win over Atromitos in the Europa League play-off first leg with his first shot on target for his new side. The Dutch star went onto score again in the 1-1 draw against Rizespor with his second shot on target for the Yellow Canaries.

Eto’o – Antalyaspor: The former Barcelona superstar has hit the ground running at Antalyaspor. Eto’o scored his third goal of the season in the Scorpions 3-1 win against Gençlerbirliği to the top of the table. The newly promoted side were expected to be involved in a relegation scrap this season but if Eto’o keeps this up they could end up being the 2015-16 surprise package.