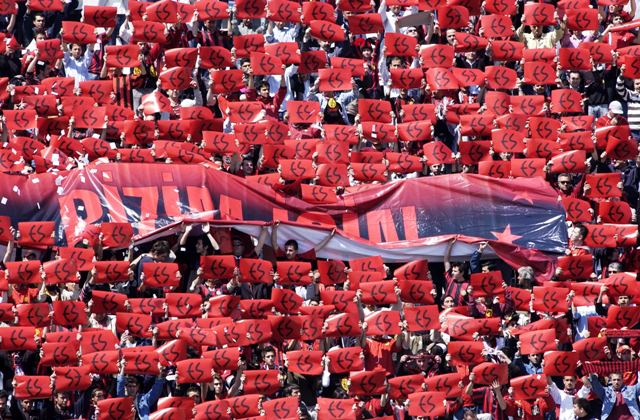 Eskişehirspor are based in the city of Eskişehir which lies in the Central Anatolian province of Turkey. Also known as Kırmızı Şimşekler (Red Lightning) and Es-Es the club is renowned across the country for their unique supporter base which includes the Bando Es-Es, a brass band with Turkish davul drums who attend home games and create a terrific, carnival atmosphere.

The club was founded in 1965 and play their games in the 18,495 capacity Atatürk stadium. The team will soon be playing their matches at the Yeni (New) Eskişehir Stadium, a proposed 35,000 multi-use purpose football complex.

The clubs roots stretch back to 1960’s when the Eskişehir Finance & Business Sciences Academy team participated in in the 1964 Konya football tournament under the name, Akademi Gençlik. In what has gone down in club folklore, the Turkish Football Federations Izmir representative Nafiz Yazıcıoğlu who attended the competition was reported to have uttered the famous words, “What are you doing playing amateur football, this team is good enough to play in the first league.”

The club organized meetings with other city based clubs at the, Kör Kamil Meyhanesi (Blind Kamil’s Bar) upon returning to Eskişehir . A local businessman Aziz Bolel distraught at the Turkish national teams loss against Bulgaria decided that the city needed a professional club to help the improvement of Turkish football. Bolel convinced Akademi Gençlik, Idmanyurdu and Yıldıztepe to merge under one club. On the 19th July 1965, after weeks of negotiations and support from the Turkish Football Federation president Orhan Şeref Apak, Eskişehirspor was officially established as a professional football club with Bolel as chairman.

The club colors were inspired by French club Stade Rennais 1964-1965 Coupe De France win, the board of directors saw an image of victorious Rennes players lifting the cup on the front page of a football magazine and immediately fell in love with the teams colors and adopted them as their own believing that it would bring them good luck.

Despite having participated for many years in the Turkish top flight Eskişehirspor, have had little success in terms of honors. Es-Es played in the equivalent of the Turkish Super League between 1966-82 during which time they finished runners up 1968-69, 1969-70 and 1971-72 and won their first and only piece of silverware in 1970-71 when they lifted the Turkish Cup. They also achieved their biggest European success during this era, in 1970-71 they defeated Spanish club Sevilla F.C 3-2 on aggregate.

Es-Es went into decline during the 80’s and 90’s drifting between the Super League and second division. The club even fell into the third division before their revival in the late 2000’s. Eskişehirspor finally made it back into the Super League in the 2008-09 season.

Eskişehirspor supporters unlike most football clubs are not renowned for their hardcore, fanatical ultra groups. The Red Lightning are unique in having the league’s first and only organized supporters band called the Bando-ESES. Founded in 2006 in the Samba Bar, Eskişehir, what started as a group of friends has grown into one of the most well known and respected supporter groups in Turkey.

Bando-ESES currently has 23 active musicians playing instruments ranging from trumpets to the traditional Turkish davul drums. They are accompanied by loyal backing members who also help out. The group bring a change to the usual chanting and really liven games up turning matches into a carnival atmosphere. They can help to control the tempo of the game and have a range of musical styles. The group are well organized, constantly growing and have have given given rise to rival bands in the leagues other teams.

Eskişehirspor fans also lay claim to one of the most unusual displays ever unveiled in a football game. The event unfolded following the Turkish Football Federations decision to impose a nationwide ban on flares in league games last season.

Flares had been widely used by supporter groups across Turkey during matches for years, however, the TFF decided to outlaw their use due to health and safety concerns.

The move had been heavily criticized by supporter groups however, Eskişehirspor fans took it one step further.
The epic display involved a huge sheet with one of the largest, Troll faces ever seen followed by the message, Problem? printed across the bottom.

The message was directed at the authorities who were unable to intervene. The Troll face, was held up by supporters across the main stand of the Atatürk Stadium and then came the pyrotechnics. The organizers had cut holes in the sheet on the left and right of the, Troll face, under which supporters lit flares and jumped in unison creating a unique and impressive show. There were no injuries reported.

The video was put online by, KoroEsEs; a leading Eskişehirspor ultra group