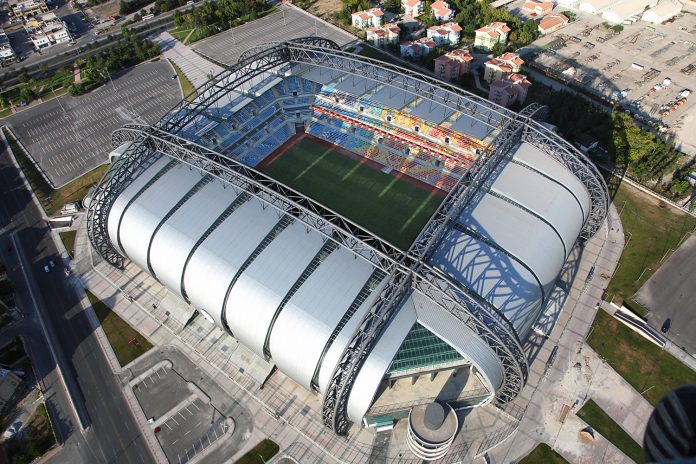 Kayserispor are based in the Central Anatolian city of Kayseri. The club is also known by the moniker, Anadolu Yıldızı which literally translates to The Anatolian Stars. Kayserispor were founded in 1966, through a merger between amateur clubs Erciyes Gençlik, Fener Gençlik, Sanayispor and Orta Anadolu Gençlik.

The Anatolian Stars play in the recently completed, 32,864 all seater Kadir Has stadium, a venue they share with city rivals Kayseri Erciyesspor. The Kadir Has is rated 4 stars by UEFA and is soon to be renovated again making it eligible to host international competition games.

The clubs emblem features Kayseri’s landmark Mount Erciyes, the K represents Kayseri, the S stands for Spor and 1966 signifies the year the club was founded.

Kayserispor, like many of the countries Anatolian clubs were founded in the mid-60’s. The rapid increase in professional clubs being founded in this era was no coincidence. The Turkish Football Federation become a member of UEFA in 1962 and in an attempt to develop Turkish football the then TFF president Orhan Şefik Apak introduced a new directive which asked for regional teams to unite in order to create more organized and professional clubs.

Kayseri took the initiative and forced a merger between amateur clubs Erciyes Gençlik, Fener Gençlik, Sanayispor and Orta Anadolu Gençlik. The move was headed by Rıfat Gönen who went onto to become the first chairman of the newly founded Kayserispor sports club in 1966.

The Anatolian Stars first spell of top-flight football was in 1972-73, however, the club became a yo-yo club in the following years drifting between the first and second divisions. However, Kayserispor have put those years behind them and since their promotion to the Turkish Super League in 2004-05 the club has never looked back. Kayserispor have gone on to become an ambitious club building a sustainable, well planned future. The architect of Kayserispor’s recent developments has been chairman Recep Mamur who has been running the show since 2004. Kayserispor have finished the league in 5th position three times since his appointment (2005–06, 2006–07, and 2007–08) and won the Turkish Cup in 2008 an unprecedented success in the clubs history.

Mamur has invested heavily in developing football academies and youth player projects. Kayserispor have just completed a state of the art sports complex built on 10,000m2 of land including club headquarters, Kayserispor musuem, conference halls, sports science labs, playing fields, training grounds and much more. The new project will start being used from next season and be the next step in the clubs growth and objective to develop the next generation of Turkish footballing stars.

Kayserispor currently have five youth teams and some of the best youth training facilities in the league. The Anatolian stars also have one of the most efficient and well organized scouting departments, having signed some of the most promising young players of Turkish descent from around Turkey & Europe over the past few seasons. Kayserispor have youngest average squad age in Turkey.

Kayserispor were involved in the worst case of crowd violence ever witnessed in Turkish footballing history. The tragedy which came to be known as the, 1967 Kayseri stadium disaster resulted in 43 people losing their life and a further 300 injuries.

The match took place on the 17th September 1967 against neighboring city rivals Sivasspor. Sivasspor supporters traveled to the city of Kayseri with a convoy of 20 minibuses, 40 coaches and by train. Minor disturbances and unrest were reported around the city prior to the kick-off and the pockets of Sivasspor fans were accused of acts of hooliganism and vandalism.

The match got underway at 16:00 infront of 21,000 fans in the Kayseri stadium. A 20th minute goal by Küçük Oktay acted as the catalysis for what was to unfold. Witnesses at the game reported that Sivasspor supporters started hurling rocks and stones at the Kayserispor stands which caused panic among the home fans and two children lost their lives in the resulting stampede. Kayserispor fans retaliated by marching onto the Sivasspor supporters with stones, sticks and knives. The outnumbered Sivas fans tried to flee however, the exit gate malfunctioned and wouldn’t open, this caused another stampede in which 41 people died and 300 were injured as a result of being trampled on and suffocated.

The Turkish Football Federation banned both teams supporters from attending each others games and the clubs were not allowed to face each other for five years.