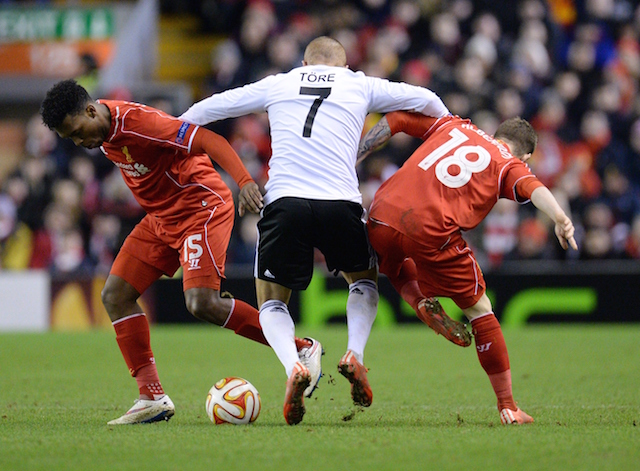 Between them Gokhan Tore, Mario Gomez & Jose Sosa scored 43 goals and provided 19 assists for Besiktas last season. The Black Eagles went onto win the league title, book a place in the Champions League and inaugurate their new 41,903 seater state of the art stadium a stones throw from the banks of the Bosphorus.

Besiktas could very well be entering a golden era but that did not stop arguably three of the Istanbul giants most influential players from jumping ship over the summer. Gomez joined Bundesliga outfit Wolfsburg, Sosa headed off to AC Milan and Tore reunited with former Black Eagles head coach Slaven Bilic at West Ham.

Things have not quite worked out for the once magnificent trio. Sosa has been benched for the past three games, Gomez has left his goal scoring boots back in Turkey and Tore is not exactly a fan favourite among West Ham fans. Between them they have provided a one assist and failed to score a single goal.

Besiktas were expected to struggle without last seasons star players but actually look a stronger side. The Eagles have scored the most goals in the league (14) and are just two points behind league leaders Basaksehir having not tasted defeat this season domestically or in the Champions League. The reigning champions also made a profit in the transfer market while strengthening their side and have at least two decent options in every position making for a more well balanced team in contrast to last season.

The meteoric fall of Tore from being a cult figure among Besiktas fans to the laughing stock of the East End has been the biggest surprise out of the summer exodus from the club. West Ham loaned Tore on a one-year deal paying £2.5 million upfront with a future £10 million buyout clause option.

On paper it looked a great deal. In fact Besiktas appeared to have been short changed in losing a key asset on temporary move. For whatever reason Tore immediately fell out of favour with West Ham fans. Perhaps it was his playing style, his work rate or simply that they wanted him to prove himself before getting behind him.

To be fair he got off to a decent start. Tore was named Man of the Match following his display in the 1-0 victory over Bournemouth – the Hammers sole Premier League win of the season. The 24-year-old made more key passes than any other player over the 90 minutes (4), made three successful dribbles and pulled off seven crosses including the one that resulted in the goal.

It all went down hill from there. Tore was given his third consecutive start within a seven day span going into the Astra debacle. The Turkish international was picked by Slaven Bilic out of necessity with Sofiane Feghouli, Dimitri Payet and Lanzini all out.

Ideally Bilic would not have wanted to rush Tore back so quickly considering he only recently recovered from a knee injury and missed most of the pre-season. Three starts within a seven day spell is taxing at times of peak fitness let alone coming back unfit off the back of being sidelined.

West Ham crashed out of the Europa League at the qualification stage for the second season running after losing 1-0 against Astra.

Tore was lambasted after the game with fans ripping into the winger – just take a look at the reaction to his display on social media: West Ham fans slam Gokhan Tore on social media following Astra defeat. It was not a first either, Tore also received a similar reaction against Chelsea, Astra and even against Bournemouth.

The Turkish international is the type of player that thrives when the fans are behind him. A confident Tore is capable of providing magic – something Bilic knows all too well from his time at Besiktas.

Bilic is the reason Tore joined over the summer. The Hammers head coach wanted his star man since he took charge of the club last summer. Bilic worked with the Turkish international for two seasons during his time in charge of Besiktas. The 24-year-old scored a career high eight goals and provided 11 sides in his second season under Bilic and excelled in the Europa League with standout displays Tottenham and Liverpool.

Tore often refers to Bilic as being like a father to him. And just to emphasise how much respect he has for the Croatian head coach, Tore was orphaned as a child and never got to know his real dad. “He is the best manager I have worked under and he is like a father to the players. You feel like you are family,” Tore said in his first interview after joining West Ham.

The last time the winger played a full 90 minutes was the Hammers 1-0 defeat against Astra back in August. Tore’s confidence has hit rock bottom and Bilic made matters worse when he gave him a rare start against Middlesbrough in the last Premier League game only to bring him off at half-time.

To make matters worse he was also dropped from the Turkish national side which coincided with Omer Toprak returning. Tore was involved in the now infamous gun incident with Toprak back in 2013 which saw a friend of the West Ham man allegedly pull a pistol out on the Bayer Leverkusen defender over a former girlfriend. It later emerged that Tore fought a friend of Toprak and that the centre-back was just at the wrong place at the wrong time but it strayed relations and the Bayer man refused to play in the same national side. The incident almost ripped the entire team apart but they are now reported to have made up and have appeared in photos together on social media. However, the fact that the moment Tore was removed from the national team setup Toprak made his full return paints a different story.

As if Tore’s season could not sink any lower he has just been ruled out for five weeks due to injury. The 24-year-old will have time to reflect and get his act in order over his time off. There is no doubting his talent and he has already proved himself under Bilic in the past. There is still a long way to go this season and the Hammers could use all the help they can get right now considering they are in the relegation zone.

If West Ham supporters want the best out of Tore singling him out might not be the best way to go about it. He has not exactly been setting the league alight but who has this season?