Tottenham have set aside €25 million to sign Trabzonspor keeper Ugurcan Cakir this summer according to the latest reports from Turkey.

The Turkey international keeper has been closely linked with a move to Europe throughout the season following a string of impressive performances in the Turkish Super Lig.

According to the daily sports paper Fanatik, Tottenham boss Jose Mourinho is a keen admirer of Ugurcan Cakir.

Per the source, the Portuguese tactician views Cakir as a long-term replacement for Hugo Lloris. 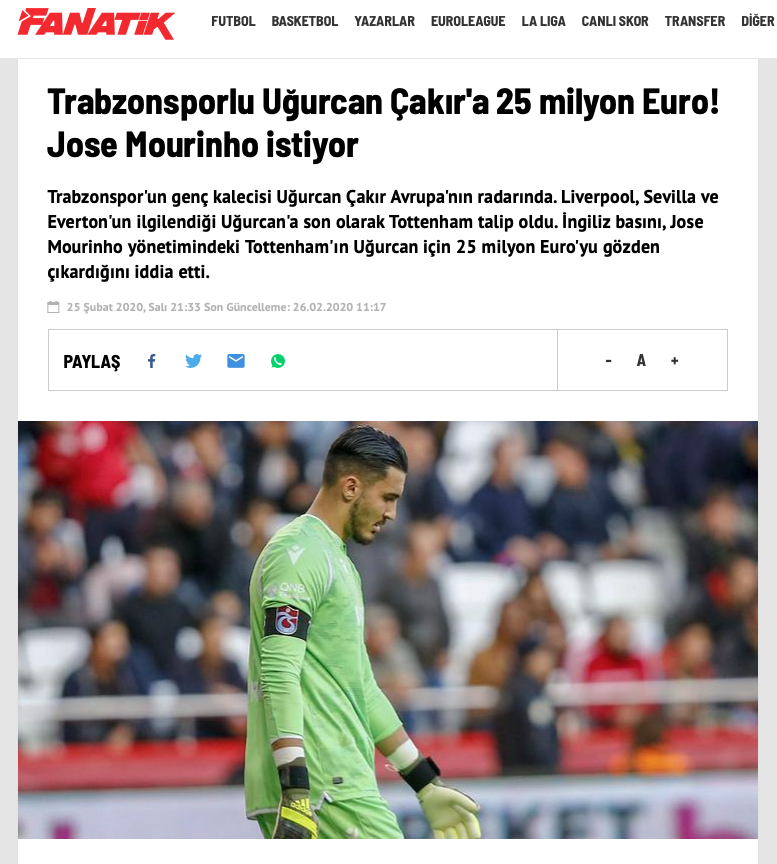 The report goes onto state that Tottenham are prepared to pay up to €25 million for the 23-year-old goalkeeper.

Fanatik also say that Tottenham scouts were present during Trabzonspor’s victory over Besiktas over the weekend.

Ugurcan Cakir has kept four clean-sheets this season has has played a key role in Trabzonspor’s impressive title challenge this season.

He has put on some of his best performances in big games this term. Trabzonspor recently beat Fenerbahce 2-1 and held Besiktas to a 2-2 draw on the road.

The Black Sea based side have not lost to any of the big three this season – Galatasaray, Besiktas and Fenerbahce.

Cakir’s form has earned him a call up to the Turkey national side and he is expected to be included in the squad for Euro 2020 this summer.

Trabzonspor will move into first place in the league if they win their game in hand against Malatyaspor.