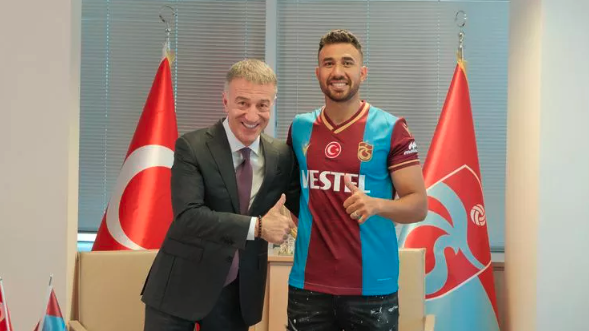 Trabzonspor have completed the signing of Aston Villa winger Trezeguet for a €4m transfer fee.

The Black Sea Storm unveiled the transfer in an official signing ceremony today at the club headquarters.

READ: Istanbul clubs to dominate Super Lig but can they break Trabzonspor hegemony?

The Egypt international wore the club shirt and posed for photographs with the Trabzonspor president Ali Agaoglu.

Trezeguet put pen to paper on a four-year deal.

Agaoglu spoke to reporters at the signing ceremony revealing that the transfer process took longer than expected but that he was happy with the result.

“The transfer process took longer than we thought it would but I want to thank Aston Villa for their professionalism and I am happy the move is now completed,” he said.

Trezeguet meanwhile, revealed he can’t wait to start playing for his new side.

“We have a great president, a great manager and great fans. I am joining the champions and looking forward to playing,” he said.

The 27-year-old is no stranger to football in Turkey and actually joined Aston Villa after a successful stint at Kasimpasa and spent the second half of last season on loan at Basaksehir.

Trabzonspor won the Super Lig title last season for the first time since 1984 and will compete in the Champions League next season.