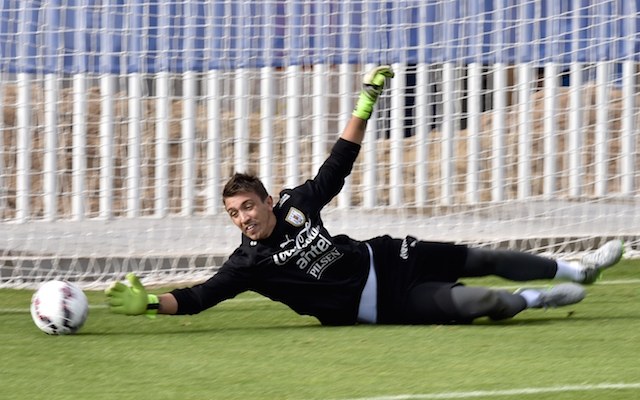 Turkish football finally returned after a lengthy break due to coronavirus disruptions over the weekend.

Trabzonspor headed into the 26th round of games as leaders and kept their top spot after beating Goztepe 3-1 in Izmir.

The Black Sea based side took an early lead when Anthony Nwakaeme headed in a cross from Joao Pereira.

The visitors shot themselves in the foot just before half-time after Guilherme got himself sent off for a second bookable offense.

Despite several nervy moments Trabzonspor managed to double their lead early in the second half thanks to Caleb Ekuban scoring from the penalty spot.

Goztepe did pull one back but Abdulkadir Omur put the game out of site scoring his sides third and final goal.

Crystal Palace striker Alexander Sorloth did not score or assist but he pretty much single-handedly win his side the penalty after pretty much running through the opposition team into the penalty area before being brought down.

Crystal Palace loanee Alexander Sorloth came up with this yesterday. Has contributed to 26 goals in 27 league games for Trabzonspor.pic.twitter.com/eU7h2gJIbc

The Claret-Blues will also be pleased to have 20-year-old wonderkid Omur back and goalkeeper Ugurcan Cakir back to his best.

All in all an impressive showing from Trabzonspor.

The same can be said for Basaksehir who beat 6th placed Alanyaspor 2-0. Playing behind closed doors will be a concern for just about every team in the Super Lig. Every team that is except for Basaksehir. The Istanbul minnows do not have many fans and are the side most used to playing games without supporters.

The Istanbul based side made light work of a tricky Alanyaspor and will fancy their chances with seven games remaining.

Sivasspor also won their game against Denizlispor to move just four points behind Trabzonspor and Basaksehir who are tied on 56 points.

The big surprise this week was Galatasaray. Fatih Terim has been there, done that, got the t-shirt. He is the only manager among the title challengers to have won silverware. You would fancy Terim in this spot over his current rivals. It was a shock to see the Lions the least prepared and organised out of the top four over the weekend.

The Yellow-Reds ended up losing 2-0 away to Rizespor. But it got worse. Star goalkeeper Fernando Muslera who has been hands down the best Galatasaray player over the past few seasons ended up breaking his leg. Andone also suffered a serious injury. Adem Buyuk meanwhile, got himself sent off.

I still would not write Galatasaray off just yet but there is no denying this was a huge blow.

Meanwhile, Besiktas lost 2-1 against Antalyaspor. The scoreline does not really reflect the game. The Black Eagles were completely dominant but profligate in front of goal. As the Turkish saying goes, if you don’t take your chances they will take theirs. And that is what happened. Despite having a fraction of the possession the Black-Whites had, despite taking far fewer shots on target the visitors ended up winning.

Besiktas are in a spot of bother considering several players haven’t been paid. Loris Karius actually terminated his contract as a result. And Mohamed Elneny could be next out. Despite this, the Istanbul giants are currently in a European spot. With Trabzonspor barred from European competition next season as things stand positions 2-5 will qualify for Europe. So there is still everything to play for.

Fenerbahce managed to beat last-placed Kayserispor despite Ozan Tufan being sent off on 15 minutes followed by Bernard Mensah putting the visitors ahead with a superb goal. Vedat Muriqi and Luiz Gustavo scored late to save the Yellow Canaries blushes.

Mensah with an absolutely stunner vs Fenerbahce pic.twitter.com/TdFSqxQ8hQ

With Trabzonspor out of Europe, Fenerbahce do still have something to play for but they are out of the title race – 13 points behind the leaders.

At the other end of the table, Kayserispor stayed anchored to the bottom. 17th placed Ankaragucu were held to a 1-1 draw against Gaziantep. Sixteenth placed Malatyaspor lost to Kasimpasa. And Konyaspor, just one spot above them lost to Genclerbirligi.

But anyone could still go down as just seven points separate last from 13th place.