Enes Unal cost Manchester City just £2 million in 2015, Caglar Soyuncu went for a similar fee to Freiburg in 2016, Cengiz Under was snapped up by Roma in 2017. Last summer Okay Yokuslu joined Celta Vigo, Mehmet Zeki Celik moved from the Turkish second tier to Lille. And in January Ozan Kabak completed his transfer to Stuttgart while Merih Demiral joined Sassuolo.

There is a growing trend of Super Lig players being poached by clubs from top five leagues. And it makes perfect sense. Turkish clubs are starting to produce players of higher caliber of player and they are available for a fraction of the price that a player of comparable quality would be worth in a more established league.

Take Yokuslu. Celta Vigo signed the 25-year-old midfielder for a bargain £5.4m fee from Trabzonspor. A player who ended his first season in La Liga as one of the Celtidos players of the season. He picked up two player of the month awards – for January and February – and established himself as a first team star.

Yokuslu has been closely linked with a move to West Ham and Tottenham recently.

I spoke to Altiparmak in my latest piece for Goal: “It is natural for there to be interest after the season Okay had.

“There is interest from sides in the Premier League and La Liga but he is a Celta Vigo player and it would be wrong to mention any names right now.

“And with regards to rumours claiming he will move to Turkey, they are false, he will be staying in Europe next season.”

Who is Okay Yokuslu?

The 1.91m tall Celta ace is an imposing figure. A swashbuckling midfielder who likes to get stuck in but he is not all brawn. There is a sophistication to his play. Yokuslu is skilled on the ball, a very technical player with impressive dribbling ability and a tactical understanding of a player far more experienced in years.

Like many of the top talents rising through the ranks in Turkey he was first spotted in Izmir – Under and Soyuncu were both from the Altinordu academy. The Aegean region is fast becoming the production belt for Turkish players.

Yokuslu was given a contract by Altay aged 12, he broke into the first-team aged 16. Kayserispor ended up snapping him up aged 17. It did not take long for the young midfielder to become a regular in the Super Lig.

Under the guidance of former Croatia national team manager Robert Prosinecki, Kayserispor finished 5th in 2013. Their highest achievement. Okay played 24 times and was really starting to make a name for himself.

Trabzonspor snapped him up next for just €2 million in 2015.

Yokuslu excelled at the Black Sea based side in his last season at the club, patrolling the midfield. The Turkey international was statistically the fourth highest rated player in the league according to Whoscored. 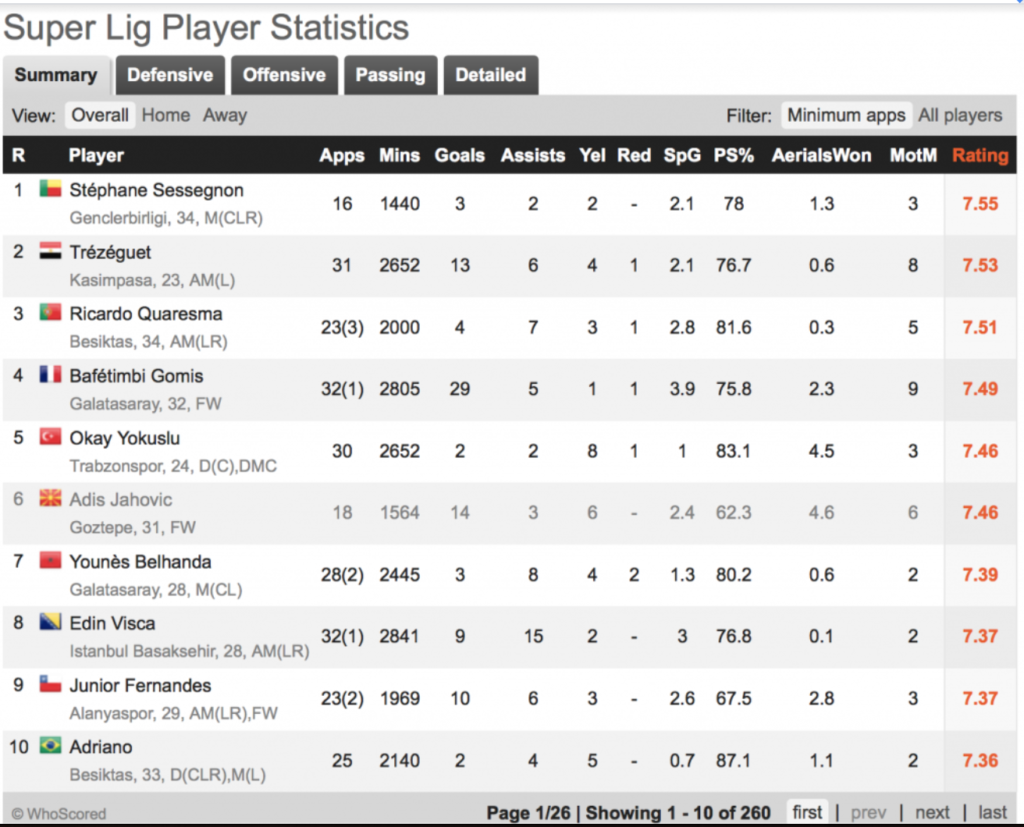 Yokuslu won more duals (227) and aerial duals (105) than any other player in the league. In his first campaign in La Liga he finished third in aerial duals won (2.6 per game).

As I touched upon above, it would be unfair to simply label Yokuslu a defensive midfield bruiser.

He has great qualities with a defensive midfielder tasked with closing down the opposition and disrupting play.

Yokuslu can play as a destroyer but for a player who looks so cumbersome, he is excellent on the ball. A deep-lying playmaker. His pass range is impressive, this term he averaged 46 passes a game at 86 percent accuracy. It is also good to see him continuing to work on his game. His decision making speed, technical and overall passing ability has improved playing in Spain.

The midfielder makes his presence felt. The type of player that can become the backbone of a team. A multi-faceted player ideal for the demands of the modern game.

He is not the quickest but his strengths compensate for a lack of breakneck speed.

What does the future hold?

Yokuslu’s form has not gone unnoticed.

A source close to the player informed me that clubs he asked not to mention from the Premier League, Germany, Italy and Spain are keeping tabs on him.

It is not difficult to see why. The Premier League and Bundesliga would probably be best suited to a player with the raw power Yokuslu possesses.

The player is represented by the Footalent management group, one of the few Turkish based agencies with a wide network outside the country. They have been involved in several moves involving Turkish players to top five leagues.

The group represent Enes Unal and completed his transfer to Manchester City and Villarreal.

They were also responsible for Cengiz Under’s move to Roma and Caglar Soyuncu to Freiburg.

Yokuslu has another four-years remaining on his contract at Celta but the La Liga side could be forced to consider offers to raise funds after a poor league finish.

The powerful midfielder has 21 international caps for Turkey and has been an important first choice player for the national team side since 2017.

As a result he would be eligible for a work permit in the Premier League as he has featured in 75 percent of games for the Crescent-Stars over the past two years.

Yokuslu turned down the glitz and glam at a young age to knuckle down and perfect his game. In Turkish they have a term for this, ‘pişti’, which roughly translates to he had time to cook. A metaphor for a raw player being thrown into the footballing frying pan alongside the ingredients required for him to cook and become the finished article. Yokuslu is out of the frying pan. He’s been perfecting his craft at Celta and is ready for the next challenge.