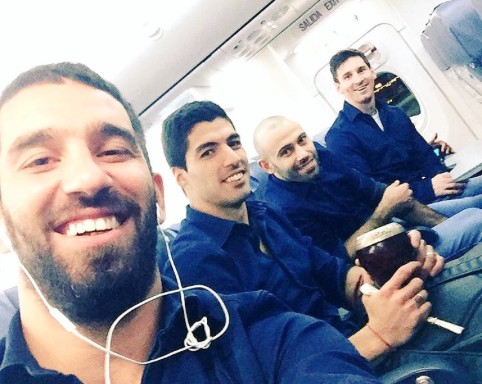 Arda Turan has been in great form for Barcelona being on the winning side of all six games since making his debut against rivals Espanyol.

Turan who recently nicknamed Luis Suarez the ‘joker’ took time out of his busy schedule to wish his teammate a happy birthday.

The Turkish international winger sent a shoutout to Suarez sending him birthday greetings in Spanish, English and Turkish.

Turan also shared a selfie on twitter posing alongside Suarez as well as teammates Mascherano and Lionel Messi.

Turan started his fifth game for Barcelona in the 2-1 away victory over Malaga on the weekend – his sixth appearance in total since making his debut in the 4-1 win over Espanyol at the start of the month. Suarez also started but failed to register a birthday goal.

Barcelona have scored an impressive 20 goals and conceded just three times since the Turkish international made his debut.