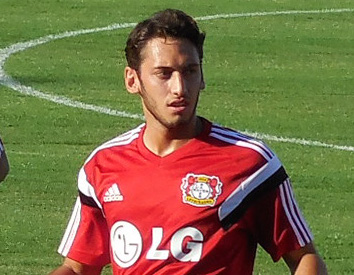 Bayer Leverkusen star Hakan Çalhanoğlu scored his sixth direct free-kick goal of the season in the 2-0 win over Hoffenheim.

Çalhanoğlu opened the scoring with another sublime free-kick effort just before the half-time whistle.

The 21-year-old has now scored the highest number of free-kick goals in the top five leagues in Europe – Premier League, Bundesliga, La Liga, Serie A, Ligue 1.

Çalhanoğlu also setup Kiessling with a well timed pass for the second goal.

The Turkish international now has a total of 13 goals and 11 assists, Çalhanoğlu has setup more goals than any other Turkish player in Europe this season other than Mehmet Ekici (11).

Arsenal are reported to be the latest club interested in Çalhanoğlu, the Gunners have been keeping tabs on the young attacking midfielder according to TalkSport.

Çalhanoğlu also recently responded to transfer rumours linking him with a move to Manchester United.

German newspaper Express asked Çalhanoğlu what he thought about being on United’s shortlist.

“A change at this time is absolutely not an issue for me. I feel very comfortable and at Bayer and I am not considering other club now. I am concentrating fully on Bayer,” Çalhanoğlu told the newspaper.

Çalhanoğlu has been closely linked with a move to the Premier League in the summer despite joining Bayer for £14.5 million last season – a record fee for a Turkish international.