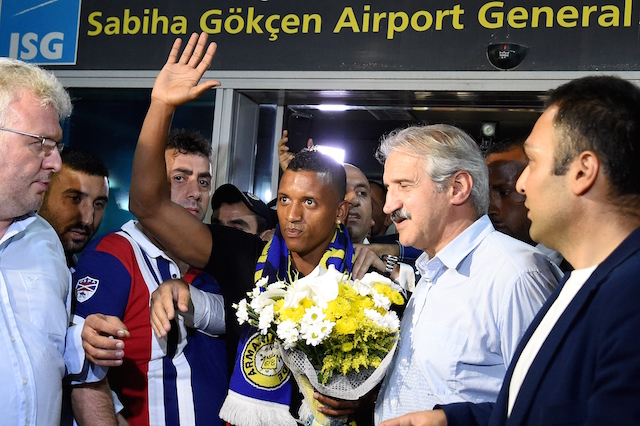 Everton have made a €5 million bid for Fenerbahce winger Luis Nani according to the Yeni Safak newspaper.

The report claims that the Toffees have submitted an offer but Fenerbahce have yet to make a decision.

Nani has an €8.5 million release clause for clubs from Europe’s top leagues including the Bundesliga, La Liga, Serie A and Premier League.

The Toffees are reported to be reluctant to activate his clause considering United sold him for less last season.

United meanwhile are reported to have already agreed personal terms with Nani according to Turkish media outlet DHA.

The Red Devils are not keen on matching his release clause fee either considering they would be buying him back for more than he was sold just a year ago.

Nani joined Fenerbahce on a three-year deal along with Robin van Persie from United and went onto have an impressive debut season scoring 12 times and providing 13 assists.

The experienced winger is currently the only player to have scored for Portugal in Euro 2016 but has revealed he will not make a decision on his future until after the tournament.

Nani recently stated that he would consider a return to the Premier League and there are reports of a rift between him and the Fenerbahce manager Vitor Pereira.