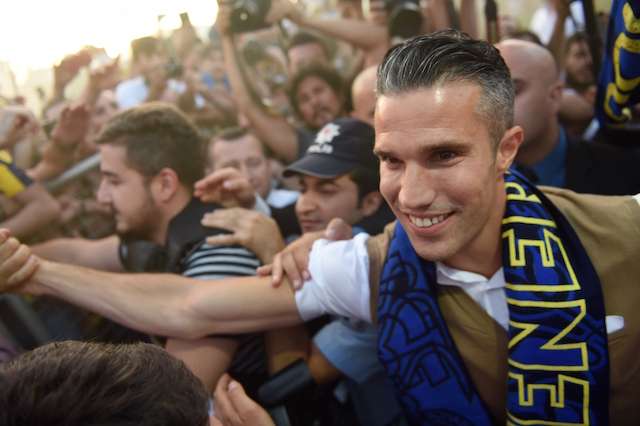 Crystal Palace have been closely linked with a move for Fenerbahce striker Robin van Persie in the press according to the Mirror.

The Dutch striker would return to the Premier League just two years after leaving United if the transfer were to go ahead.

We took a look at how Palace fans reacted to reports that Van Persie could be on his way to Selhurst Park on social media.

There was a mixed reaction to the report with some fans feeling Van Persie is too old to play Premier League football, while others believe he still has something to offer.

Too old, waste of a squad number and wage!

If he’s 70% the player he was this would be some coup!

Would actually love to have van persie at palace ?

Premiership might be a bit beyond him now and wouldn’t come cheap. Most want us to look elsewhere.

Perhaps he could be backup to Benteke? we are not sure Van Persie still has a full 90 minutes of Premier League football in him but the man can still find the back of the net.

The 33-year-old has 40 goals in 87 games for Fenerbahce since joining from Manchester United.

Not sure about being Benteke,s backup but maybe as an impact sub.Dont know what sort of shape he is in but am guessing de Boer does know.

Put him together with @chrisbenteke and you will see how these two perform!!

Arsenal fans had quite a lot to say as well. It appears there are still those in North London who have not forgiven Van Persie for leaving them.

Robin Van Persie on his way to Crystal Palace, tears in my eyes

He’ll score goals though, that much I know.

Also, imagine celebrating vs the club who stood by you during injuries and times when accused of sexual assault. He’s a prat, end of story

Oh how the mighty have fallen