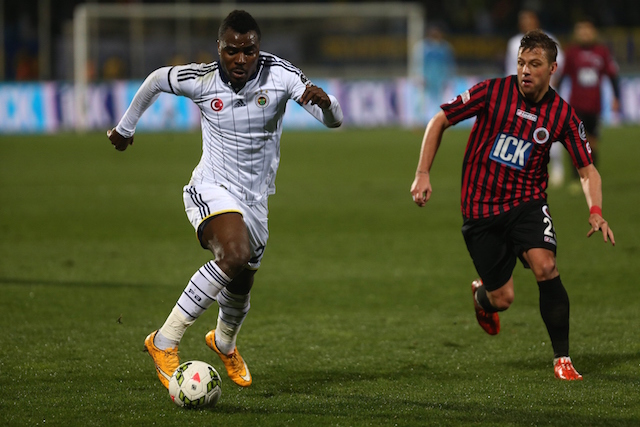 Emenike has arrived in London to under go a medical. More news soon ?

The Nigerian international is currently in talks with West Ham but the Hammers will have to reach a deal with both Fenerbahce and his loan club Al Ain according to West Ham head coach Slaven Bilic.

Bilic was quoted by the Daily Star as saying: “We are looking to strengthen our squad in that position. We aren’t going to buy a player, definitely, but if we can loan one we will do it.

“We are still waiting. It’s a complicated situation because he is a Fenerbahce player but he was on loan at Al-Ain.

“We spoke with Al-Ain and thought we could do a straight swap with them but Fenerbahce had to be involved.

“In the beginning it looked easy. Then one moment it didn’t look very good.”

The Hammers head coach expects a decision to be made by Fenerbahce and Al Ain over Emenike by tomorrow.

“Now we are waiting to see if it is going to be today, tomorrow or not,” Bilic was quoted as saying by the Daily Star.

The 28-year-old scored seven times in 11 appearances for Al Ain and Bilic is familiar with Bilic from his time coaching Istanbul rivals Besiktas.