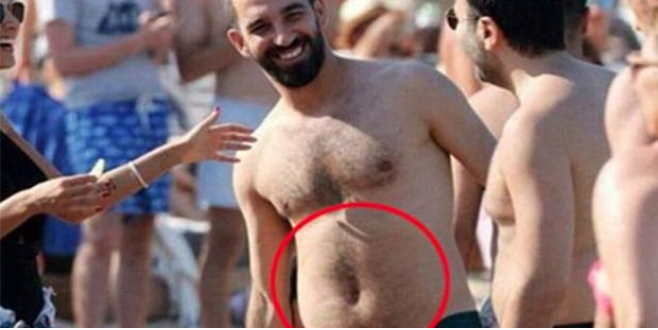 Barcelona star Arda Turan has been closely linked with a move to Arsenal this window.

The 30-year-old’s current physical form could however, be of concern to any club interested in his services.

Turan has been busy enjoying himself in Mykonos, Greece but he could probably do with watching his figure.

The attacking midfielder was spotted sporting the kind of belly not usually associated with an elite athlete.

It looks like the former Turkish international could do with pre-season training ASAP wherever he ends up over the summer.

Or perhaps it was to do with the angle of the picture?

This guy plays for Barcelona!
Arda Turan needs to lay off the baklava! ? pic.twitter.com/LaQeaqid5y

Barcelona want €30 million which at todays exchange rate works out at £26.6 million according to Mundo Deportivo.

Per the source, Arsenal are keen on Turan but want to negotiate a lower transfer fee.

Turan has been closely linked with a summer exit but he does still have another three-years remaining on his Barcelona contract.