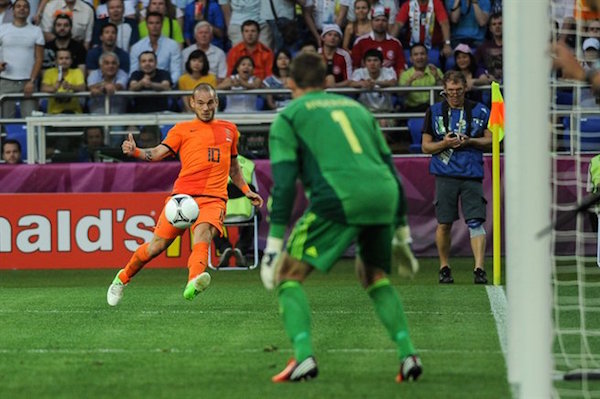 Galatasaray star Wesley Sneijder has laughed off accusations of match fixing following the 1-0 win over Gençlerbirliği on the weekend.

Sneijder scored the winning goal but Gençlerbirliği goalkeeper Ferhat Kaplan was accused of deliberately pulling back from saving the Netherland international captains shot.

“All you can do is laugh, it is a joke right? some people believe in conspiracy theories way too much it is hilarious,” Sneijder was quoted as saying in the Milliyet.

The Gençlerbirliği keeper was accused of deliberately pulling his arm away from making the save.

Sneijder – who was making his 100th appearance for Galatasaray – scored the only goal of the game earning his side the three points on the night.

The win kept Galatasaray at the top of the table three points clear of second placed Fenerbahçe.

One of Kaplan’s biggest critics was Beşiktaş keeper Güney Güvenç who ironically conceded a goal directly from a corner kick in the following game.

Beşiktaş ended up losing the game against Konyaspor 1-0 and crashing out of the title race.