Mesut Ozil unknowingly sparked controversy in Spain after Almudena Negro of Spain’s People’s Party directed a tweet at one of her political rivals Pablo Gomez Perpinya. In a move that even the best gambling sites couldn’t foretell, Ozil, for once, wasn’t involved in a story involving a lack of on the pitch enthusiasm.

Negro accused Perpinya of negligence posting a photograph of who she alleged was the politician at home playing video games. 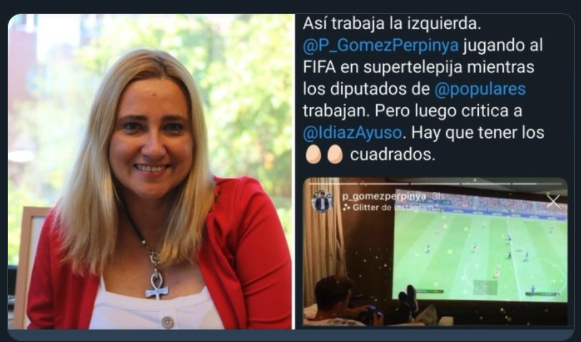 “This is how the left work,” Negro said as she started her tweet.

“Pablo Gomez Perpinya is playing FIFA on a posh super TV while the People’s Party delegates are working.

“Yet he then criticises Isabel Diaz Ayuso.

“You need to have big balls for that.”

However, the photograph was actually one of Ozil playing FIFA on a giant screen.

Perpinya went onto expose his opponents gaff leaving her redfaced.

He tweeted: “Madam, don’t spread hoaxes. The one in the photo is Mesut Ozil. I have less money but my grandmother says that I am more handsome and I am worth it.”

Ozil meanwhile has been at home. His wife recently gave birth to their first child, Eda.

The playmaker of Turkish origin has been playing video games and streaming his performances on Twitch.

The Premier League is currently suspended due to coronavirus. As things stand a return date has yet to be set.