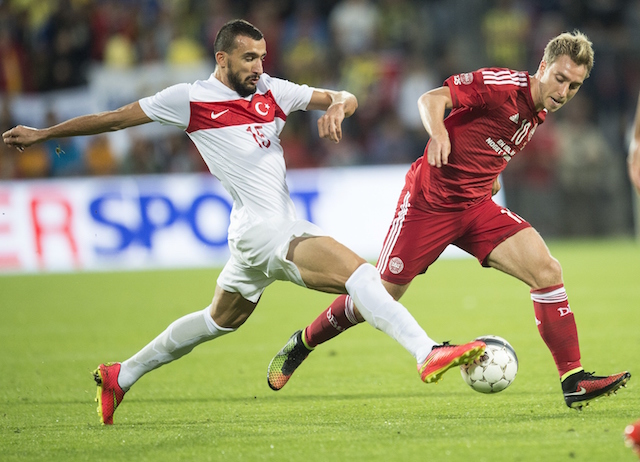 Tottenham have reached an agreement-in-principle with Fenerbahce midfielder Mehmet Topal according to Fanatik.

The Turkish sports newspaper claim that Spurs have struck a deal to sign the defensive midfielder on a free transfer.

Topal has under six-months remaining on his contract and Spurs can enter direct talks with the Turkish international.

Spurs were previously linked with a €6 million move for Topal last summer but the deal fell through. The north London based outfit are reported to have been keeping close tabs on the experienced midfielder throughout the season.

Topal is a vastly experienced player. The ‘spider’ as he is nicknamed has won the Turkish Super Lig and Turkish Super Cup with both Galatasaray and Fenerbahçe and had a two-year stint in Spain playing for Valencia.

The 30-year-old midfielder also reached the semi-finals of Euro 2008 and is expected to join the Turkish national team in France this summer.

The dual footed midfielder – and part time superhero – is not all about tough tackling and getting stuck in. He is capable of building pulling the strings in the midfield with his quick thinking and accurate passing.

Topal is rumoured to be considering moving abroad after surviving two attempts at his life. The most recent event occurred while travelling with Fenerbahçe youngster Uygar Mert Zeybek in his Mercedes G 63  shot at in an armed attack following training at the Can Bartu grounds.

Topal was in his car returning home when his vehicle was shot at however, the gun attack did not prove to be fatal as the bullet proof glass protected the Turkish international from serious injury.

The electroluminescent bulletproof glass of the G 63 model ultimately saved Topal and Zeybek from a potentially fatal attack.

Topal was also on the team bus during the last armed attack on Fenerbahçe in April.

The first attack occurred when the Fenerbahçe team was making its way toward Trabzon’s airport following a 5-1 Süper Lig victory at nearby Çaykur Rizespor.