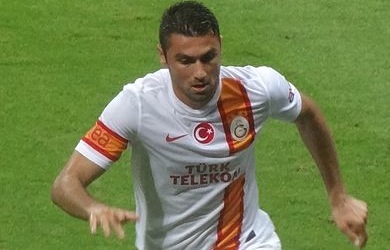 West Ham have offered Galatasaray striker Burak Yilmaz an offer worth €4 million per-season on a three-year deal according to Futbol Arena.

The report claims that West Ham boss Slaven Bilic wants the Turkish international and that an offer has also been submitted to Galatasaray.

Bilic knows Yilmaz from his time coaching Beşiktaş over the past two-seasons and is reported to be keen on the experienced striker.

The 29-year-old striker extended his contract with Galatasaray until 2019 last season and earns €2.8 million per season plus bonuses.

The Croatian manager reached the Europa League quarter-finals knocking Liverpool out along the way during his time at Beşiktaş.

Yılmaz has a great strike rate at club and international level. The prolific striker has scored 72 goals in 121 games for the Istanbul giants since joining from Trabzonspor in 2012.

Galatasaray won the league for the 20th time last season and booked a place in the Champions League group stages for the fourth consecutive season.