Arsenal may have found a buyer for Danny Welbeck according to the AMK newspaper.

Galatasaray are plotting a move for the England forward after being informed through intermediaries that the Gunners are prepared to part ways with the forward.

The Lions meanwhile have made signing a new forward a priority following their Champions League windfall.

The reigning Super Lig champions could earn up to €50m following the exit of Fenerbahce to Benfica in the Third Round.

Galatasaray are preparing to invest some of their additional revenues in a new forward. 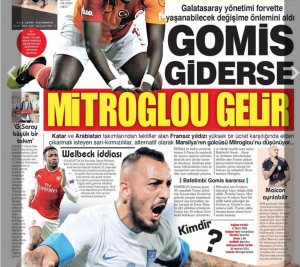 Welbeck is among the names on the Lions shortlist but they will have to sell a player in order to make the transfer.

The Yellow-Reds are planning to sell Bafetimbi Gomis to Qatar or Saudi Arabia and bring in Welbeck as a replacement.

The Lions would be able to offer Welbeck Champions League football this season and the guarantee of first-team football.

Sources close to Welbeck did however, recently inform Turkish-Football that the striker does not have plans to play in Turkey and that he is happy at Arsenal.

Could the prospect of a season on the bench cause Welbeck to reconsider? well we will find out by 1 September when the Super Lig transfer window shuts.