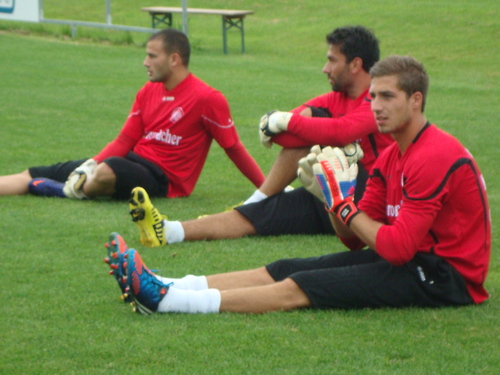 Aykut Özer is a goalkeeper for German side Eintracht Frankfurt and stands at 6’2. He is an athletic keeper renowned for his handling and great reflex saves. Aykut is considered by some as one of the best young goalkeepers in the Bundesliga.Aykut was born in Hanau, Germany to Turkish parents, which makes him eligible to play for the country of his parent’s birth. The young goalkeeper started his career at local club TSV Hanau in 1999 at the age of six – he played there for three-years until being picked up by Eintracht Frankfurt in 2002.The young keeper played in the youth teams until 2011 during which time he showed promising signs – picking up countless clean sheets. Aykut was subsequently promoted to Eintracht Frankfurt II, the club’s reserve team where he made three appearances in his opening season.This season he picked up 10 appearances for Eintracht Frankfurt II and started to establish himself as their regular keeper towards the end of the league campaign.Aykut’s impressive performances earned him a move into the first team squad of Frankfurt for the final eight-games of the season. He remained on the bench for all games until the final day of the season in a crucial game against Wolfsburg. Frankfurt needed to avoid defeat and hope their other results went their way if they were to qualify for a Europa League spot.The game did not start well for Frankfurt and they were 2-0 down after 20 minutes. However, a controversial decision in the 36th minute saw Wolfsburg player Hasebe sent off and a penalty awarded to Frankfurt. The penalty was converted and Frankfurt were back in it. Frankfurt were on track to get back in the game but first-choice keeper Nikolov had to be taken off with a thigh injury in the 66th minute. It was Özer’s chance to shine, and he did a good job in preventing Wolfsburg from scoring again. A last minute equalizer for Frankfurt saw them hold on to 6th position and make it into Europe.After his impressive Bundesliga debut, the future looks bright for Aykut and he has been promised more football next season by current manager Armin Veh. Özer has represented Turkey at youth levels since the age of 17 and is expected to be the No. 1 goalkeeper for the Turkish U20 side. Aykut has a great opportunity to make a name for himself in the U20 World Cup and push towards becoming the main keeper of Turkey and Frankfurt in the future.By Emir AfiyaYou can follow Emir on Twitter: @TotalTurkTalk