Ryan Babel met up with Liverpool midfielder Gini Wijnaldum yesterday and had a surprise for Besiktas fans.

Babel asked his followers whether he should convince the Netherlands international to join the Black Eagles.

The results where an overwhelming, ‘Yes do it!!!’. 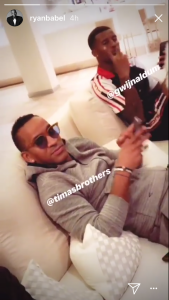 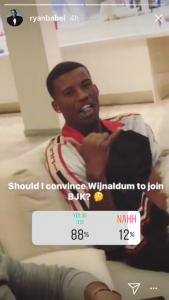 It is odd that Babel openly asked Besiktas fans if they want Wijnaldum. Babel would be aware how this will be interpreted in Turkey and there are already stories claiming the former Liverpool man is hinting at a transfer.

Just a few days ago Everton forward Cenk Tosun appeared to have announced Porto’s Vincent Aboubakar will be joining Besiktas.

Wijnaldum does have another three-years left on his Liverpool contract and did make 50 appearances in all competitions for the Reds over the 2017-18 season.

The 27-year-old will face a lot of competition in the Liverpool midfield this season following the arrival of Naby Keita and Fabinho.

Emre Can did leave for Juventus last week but there is still stiff competition for places in the Reds midfield.